It’s safe to say I’ve had my fair share of heart stopping moments whilst being a mother, actually, even before I was a mother.

We lost two babies before we had Jack, being told there was no heartbeat is like a punch in the stomach then being left with an empty feeling, it just felt like a never ending nightmare and like our future had been taken away from us before we’d even had it.

Then with Jack being born prematurely, I was constantly on pins, praying that nothing else would go wrong, hoping each day that he’d be healthy enough to come home, but there was always the reassurance that the medical staff were there, that they wouldn’t let him come home until he was “right”.

So it’s safe to say pregnancy is a pretty terrifying for me, I have a whole host of health problems during my pregnancies, so I get kind of impatient waiting for my baby to “just be here”, but nothing can prepare you for the fact it could all be taken away in an instant.

This time last week, time stood still and it felt like my heart stopped, it’s actually taken me a week to write this blog post because I’ve only just got my head around it.

Having a late night with the hubby, watching Goodfellas (as you do), it was three minutes past twelve (don’t ask me how I remember that, time literally stood still) and Nicole was being fussy and not wanting to feed even though she seemed hungry, which is not like her, she loves to feed and would literally be on my boob all day.

Then suddenly she started making a grunting noise and was bolt upright, as if she was in agony, I tried winding her and then she began struggling to breathe. I passed her to Paul he couldn’t settle her either, she was getting more and more worked up and unable to breathe properly so we rang an Ambulance.

It’s strange, my kids will do things throughout the day like climbing and falling but not hurting themselves, eating and almost choking, becoming ill with a cold or virus and it’s always in the back of my mind to ring a professional for help either my doctors or the hospital, but in this situation I just knew we needed emergency care.

She started to turn blue

I took her back in my arms and she went from feeling like she was full of frustration and bolt upright, to floppy with her eyes rolling back and she started to turn blue.

That moment was the most terrifying of my life, I felt like every part of my body that holds me together just fell apart, helpless…that’s the word. Suddenly for that moment the world stopped and everything felt quiet and cold, I was on the phone to the emergency services and I could hear the woman saying “calm down or I can’t help you, please calm down” then I realised I was hysterical, I didn’t even know I was, I’d gone completely into myself, just for a moment but it felt like hours, then my phone battery died.

It was as if her body was giving up

That was it, I snapped back to reality with the terrifying concept she may not have arranged an ambulance. I’d told her my address, I’d told her my baby was four months old, actually I think I told her that about 20 times, we quickly rushed to the house phone, by this time Nicole had come back round but she was still slightly limp and grunting, it was as if her body was giving up.

My husband got onto the house phone and rang 999 again, I could hear him pleading with them to just send an ambulance, but he later told me they wouldn’t until he’d been through the appropriate questions, all I could hear him saying “my baby is four months old and she isn’t breathing, please send an ambulance” and then he kept saying “just send one”, “please she isn’t breathing just send one”, by this time an Ambulance was outside our home, thank goodness the first call handler from when my phone had died had sent one.

She was going to be OK

I ran into the ambulance, I had no shoes on and Nicole was only in a t-shirt, by this time she had come round a lot but was still grunting, so we took her to hospital. I nipped into the house just to grab some nappies and baby grow for her and the realisation hit me like a wave, she was going to be OK, I mean for all I knew it could have happened again, but I don’t know how to explain it, I just felt it, she was OK.

She was checked over and cooed over by every member of staff in A&E and they reassured me this is just a thing that happens with young babies, they just have these little episodes, some come round from it, some don’t, so we’re very lucky.

The fact that this “just happens” terrifies me, I love being a mother, it’s the best thing I’ve ever done in my life, but since the moment my first child was born I have this unbelievable fear of how I could ever cope with life if something happened to one of my babies, as the saying goes “it isn’t worth thinking about” but last week Nicole made me think about it and that was my heart stopping moment and I hope I never have one again in my life. 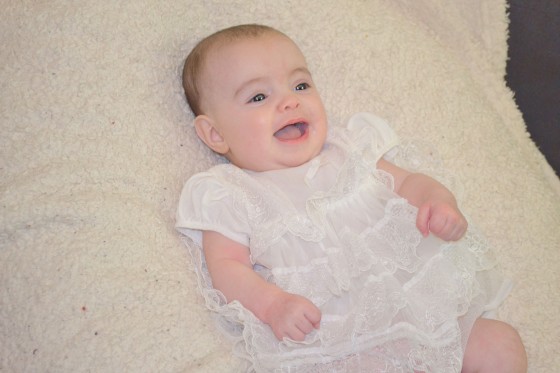 We hadn’t planned it this way, it felt like it took forever to finally have our first baby in our arms. Now our home is overrun by tiny dictators.

As they say the days are long, but the years are short. This is true, the days are really really long and so are the nights. You know how people tell you at different stages how their kids started “sleeping through”…yeah! Mine did that too, they love their sleep…Then you have to take off the nights where there will be teething, nightmares, sickness, illness, over-tiredness, hyperness or the fact they just don’t want to sleep. But when you have to be at an appointment for 9am guarantee they will want to lie in until lunchtime. Basically if you want to live in a world full of irony, have kids.

Bribery…this will be your key to survival when you have relentless toddlers. Some people will say you shouldn’t bribe your kids, to them people I say spend a day in my house, you will soon turn into a bribing negotiator. Unless you give a child a good reason to do something why are they going to do it? Would you go to work if you didn’t get paid? So if I want my child to sit still while I dress him so I can get out of the house on time, I have no qualms about offering them a treat when they get to town if they just get their coat on! Or threatening to throw all of their trains in the bin if they don’t apologise for hitting their brother. I might be going about it the wrong way, but I haven’t had to threaten or bribe as much as they’ve got older because they know if they are good they will get rewarded and if they are naughty they will be punished…isn’t that just like grown up life? But you MUST follow through, if you show any sign of weakness and use empty threats your kids will jump on that opportunity to over rule you like tiny little terrorists.

Leaving the house is a military operation, especially when you need to be somewhere for a certain time…why is it I’m always given the 9am appointments? So my mode of transport is a double buggy called Zoom by Obaby. It’s not your standard double buggy, but I prefer it. Then I have Nicole in my Ama Wrap, it looks a little something like this… 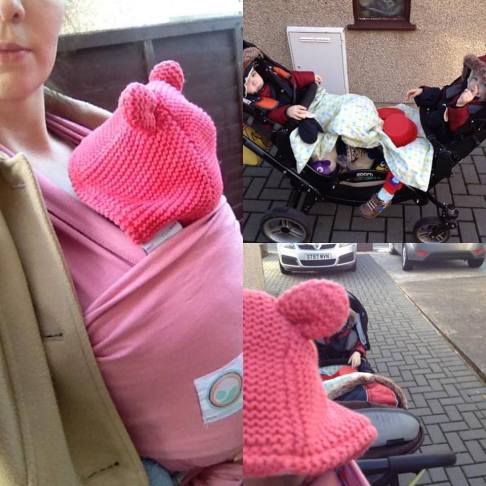 Nicole also has her own buggy a Redkite Push Me Fusion, for when I’m with my husband so we can push a buggy each. 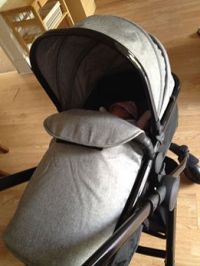 It’s when I’m by myself with the three kids I get heckled, some comments I don’t mind, like “Oh wow how do you cope?” because to me they are saying, you do cope…how do you do it? But it’s when people stop and gawk in horror as if I’m pushing around a cart of explosives and comment with “I bet they weren’t planned” or “I hope you’re going to stop now” and “You’ve got your hands full you know?!” the answers are actually they were all planned, I’m not ready to stop and I’ve got my hands and heart completely full of love, nappies and snot…I wouldn’t change a second of it.

Be ready to keep bobbing up for air in a sea full of nappies, that’s right, none are potty trained yet. I keep trying to introduce Jack to it and we’re getting there, but I’m a great believer of not forcing something like using the toilet, he’s got the rest of his life to be doing that. It can become unbearable when they all poop at the same time, but just be ready to take lots of trips to the outside bin or get a diaper genie, either way if you forget and put a stenching nappy in an indoor bin, you’ll soon realise…trust me. 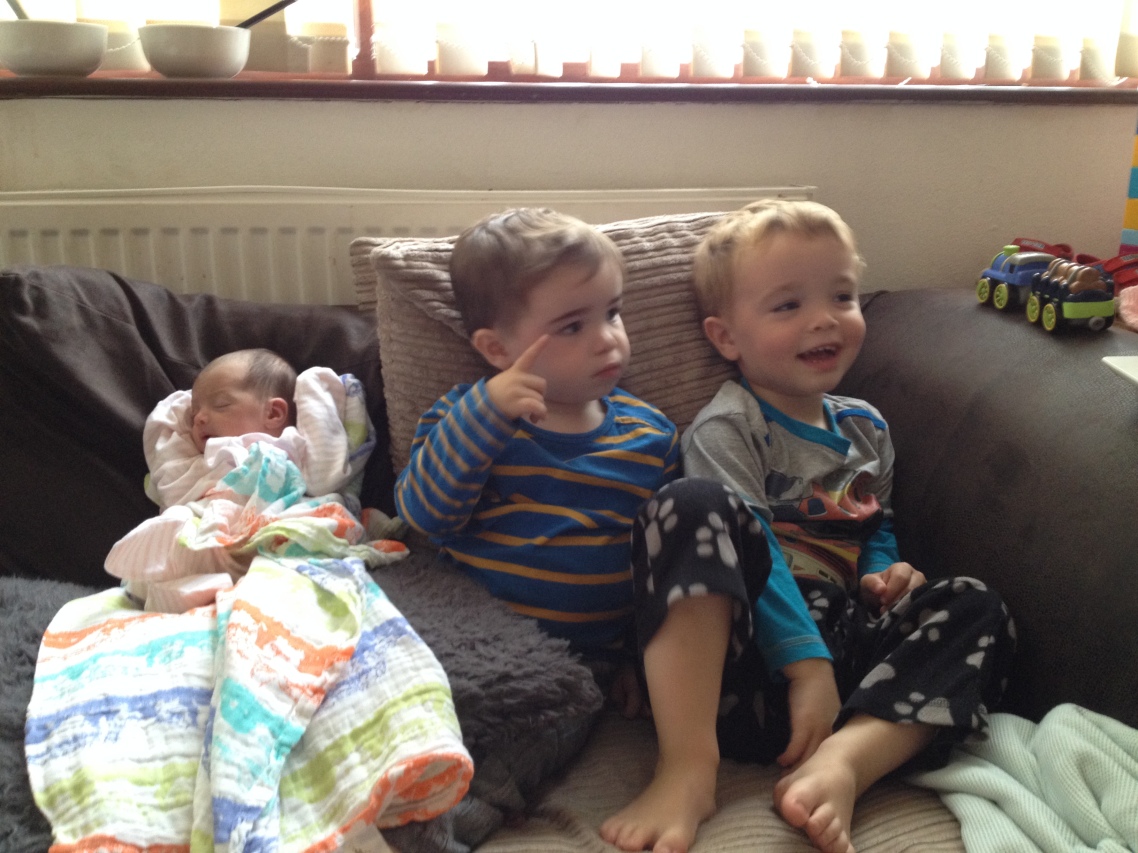 People think I’m crazy for having three kids in three years, what I think is crazy, is waiting a few years then doing it all over again. Don’t get me wrong there are benefits I’m sure for having an age gap, more one on one time with each child, a bit longer between the crazy newborn stages but for me, I haven’t ever got out of the “baby stage” I still haven’t! Nicole is three months so she is still very much a baby! I will be waiting or stopping now I haven’t decided, but literally because I have nowhere to put a fourth baby, the boys are in the buggy, Nicole is on my chest…there is nowhere for another one to go!

The key of surviving being overrun by nappy wearing hooligans is keeping your cool, if you lose your shit they will lose theirs. The hard times will pass, the tantrums will finish and everything will always end in cuddles.

Life is hard when you have three kids in three years but I’m sure life would be hard having three kids in 10 years! They are kids, they are hard at all stages of life and to be honest…adults aren’t that easy either, are they? Everyone’s going to do it their own way and this is my way…I thrive on the mayhem. 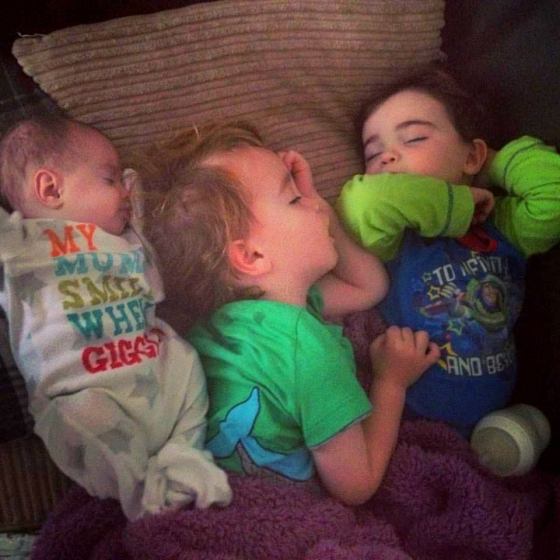 Mummy to two boys, who are 10 months apart, blogging about everyday life as a stay at home mummy!